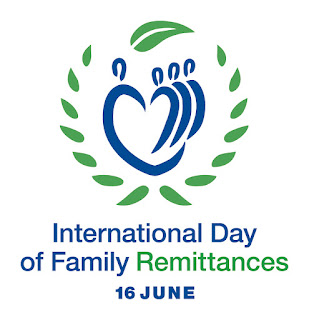 Over 250 million migrant workers live outside the country they call home. A significant majority of them send money home, typically US$200 or US$300 several times a year.

Remittances are crucial for families and often represent more than 50 per cent of family income. These funds allow families to address their basics needs such as food, housing, health and education but also help them to raise their living standards above subsistence levels.

Remittances can also be a powerful engine for development, in particular in rural areas where 40 per cent of the flows go.

Remittances are also crucial in fragile states or disaster-affected regions. They are often the only income families have, and thus can play a role in the reconstruction and stabilisation of those states.

The International Day of Family Remittances is an opportunity to highlight the immense potential of remittances for development.

The International Day of Family Remittances was unanimously proclaimed by all 176 IFAD Member States during its Governing Council in February 2015, and will be submitted to the United Nations General Assembly for formal endorsement in 2016.
​

If you want to join this worldwide initiative from IAMTN and it’s members please confirm by filling in the form bellow or e-mail us at iamtn@iamtn.org and we will include your company name on the pledge.

The completion of the joint project enables clients to send funds from Tempo’s locations in France and Germany and receive it in financial institution branches, in 18 African countries including Benin, Burkina Faso, Ivory Coast, Niger, Tanzania and Togo.

The number of financial institutions covered includes 3 banks in Ivory Coast, 6 in Burkina Faso, as well as 4 banks and the nation-wide post service in Benin.

The number of new locations where clients can collect cash, is almost 600 in these 3 countries alone.
In Germany and France, the European-licensed company operates over 100 agent locations.

It is yet another large-scale Tempo project, in Africa. In August last year, the France and Germany – based operator started operations in Guinea, Senegal, Gambia, Nigeria, Mauritania and Sierra Leone.
The number of locations where Tempo services became available, exceeded 1000 in Senegal, with the country’s 45 cities and towns covered.

In Guinea, the number of locations is now over 500, in 33 provinces. 50 locations are available in Nigeria, 20 in Gambia and 3 in the capital of Sierra Leone.

At the beginning of 2015, Tempo completed a large-scale project in Morocco to start pay-out services in 2,600 locations.

In his comments on the high volume of business developments in Africa, the president for Tempo Money Transfer, Mr. Jeffrey Phaneuf said that the economies of many African countries, vitally depend on remittances.

“The population in the vast number of countries [in the continent] depends on the money, their loved ones send from Europe, particularly from Germany and France. This makes the development of money transfer corridors in Africa, a very important task and gives it a significant social role,” he said.

Tempo has diligently been working on their services, to facilitate financial inclusion for people with lower income, he said.

“One of our main priorities is providing European quality and reliability, with an accent on affordable transaction costs. This makes for effective decrease in the black market, bringing the transactions into the open, regulated sphere. This benefits the host country's economies and our customers, as well.”
One of the most ambitious money transfer market players in the EU field, Tempo Money Transfer operates in over 120 countries worldwide. Its services are available in over 190 000 locations, offering its clients services of genuine European standards.

Tempo France has registered its trademark with OHMI, and is a member for the IAMTN.
Posted by IAMTN at 06:49:00 2 comments: 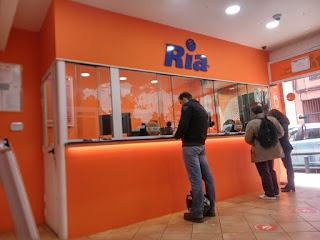 Buena Park, CA, May 31, 2016 -- Ria Money Transfer (“Ria”), the third largest money transfer company in the world and subsidiary of Euronet Worldwide Inc. (NASDAQ: EEFT), continues its global network expansion and now serves customers through more than 310,000 locations in 150 countries – affirming its position as one of the fastest growing global money transfer providers.

“A record number of customers and business partners are now choosing and benefiting from
Ria’s fast, secure and affordable money transfer services,” said Juan Bianchi, Ria’s CEO &
President, following the Company’s milestone achievement. “Ria has been experiencing remarkable network expansion in recent years, and this steady growth has resulted in increased remittance volumes for our partners, while enabling us to better serve our customers.”

Since being acquired by Euronet in 2007, Ria has grown its money transfer network more than seven-fold. This is the combined result of the global staff’s ability and commitment to develop and maintain strong partnerships with their customers and business partners, as well as the capability to make opportunistic acquisitions which have expanded the Company’s presence in new and existing markets.

“In addition to cash-based transfers, Euronet’s Money Transfer Segment has significantly expanded its digital presence through the launch of riamoneytransfer.com and the May 2014 acquisition of HiFX,” explained Bianchi. “This new digital channel makes money remittance and foreign payments convenient and affordable for more customers that either need to transfer money to family and friends, or make international payments.”

“I am proud of the global staff for achieving this great milestone, but it doesn’t stop here. We will continue to offer our customers and partners the service they have come to expect and rely on, while expanding our portfolio to offer a wider range of integrated financial solutions that meet their evolving needs,” affirmed Bianchi.

Ria, a subsidiary of Euronet Worldwide, Inc. (NASDAQ: EEFT), is a global leader in money remittances. Ria offers fast, secure, affordable money transfers through a network of approximately 310,000 global agents spanning 150 countries and online at www.riamoneytransfer.com. The company is steadfast in its commitment to its customers and remains ingrained within the communities in which they live.
Posted by IAMTN at 06:07:00 2 comments: