International Paris-headquartered remittances service provider, Tempo Money Transfer (TMT) and one of Pakistan's leaders in the banking sector, MCB bank have successfully launched their money transfer services between Europe and Pakistan.
The project completion gives clients the opportunity to send funds from one of Tempo Money Transfer's locations in Germany and France, to recipients at one of MCB's service locations in Pakistan.
Tempo Money Transfer’s services are available in 70 agent locations in the EU. In addition to this, the France-based system operates one fully licensed retail store in central Paris.
Clients can pick cash up, once sent with Tempo Money Transfer in one of over 1, 200 MCB branches across Pakistan. The bank operates nationwide, in all provinces and cities including Islamabad, Karachi, Multan and Lahore. Upon request, funds sent, can be credited to the beneficiary’s bank account. SMS notification is available on the transfers.
The president for Tempo Money Transfer, Mr. Jeffrey Phaneuf said the project has great appeal, not only to Pakistani nationals living and working in France and Germany, but also to the country's economy.
“Given how many immigrants from Pakistan reside in the EU, Germany and France particularly, we expect quite high growth in remittances volumes and client numbers. This, we believe, will be very beneficial to the country’s economy,” he said.
The business head of transaction banking division for MCB, Mr. Aali Shafi said the project also makes for further promotion of quality EU money transfer services in Pakistan.
“The demand for high quality services is growing in Pakistan. We are very happy to be in alliance with Tempo Money Transfer since the project opens the door for Pakistani people who live in Europe and send money to their loved ones here”, he said.
Currently Tempo Money Transfer operates in over 100 countries worldwide. Its services are available in over 200 000 locations, offering its clients genuine European standards. It has recently completed assertive projects in Sri Lanka, Nepal, Romania and Moldova, as well as Comoros.

In collaboration with global electronic payment network iSend, the France-based money transfer operator Tempo Money Transfer has recently enabled clients to top up their mobile phones globally, at service locations of the Paris-headquartered operator.
This synergetic project completed by iSend and Tempo Money Transfer, is designed for those who are living and working abroad and wish to provide support to their families and friends back home. Money paid in Tempo Money Transfer locations can recharge cell phone credit in 80 countries throughout the Americas, the Caribbean, Africa, Europe, the Middle East and Asia, including India and Oceania.
“It is very important for Tempo Money Transfer to enlarge its product spectrum, to make the system more attractive to people. The clients can top up the cell phones at over 300 service providers globally, through our network in France and Germany, which currently exceeds 70 locations,” said Tempo Money Transfer's president, Mr. Jeffrey Phaneuf.
He went on to say that it is a strategic and ambitious plan of Tempo Money Transfer, not only to permanently increase its partner network globally, but also to proceed with rapid expansion of the product range. We can see how fast the global e-payment market is growing and are diligently working on our integration into it. Our advanced IT systems enable us to work with service providers specialised in different spheres of this field. The project with iSend is a great example,” he said. Mr. Phaneuf believes that the demand for the product will be very high.


“This kind of remote cell phone topping up, is now no less popular and needed than money transfer services since it is a very convenient way to help families and friends who are far away. As a company that is granted with pan-European license and of European quality, Tempo Money Transfer aims be one of the key providers, pioneering these services in the EU,” he said.

This landmark agreement between Barwaqo Microfinance Bank and the multinational MoneyTrans is the first of its kind and represents a paradigm shift in the money remittances scene. 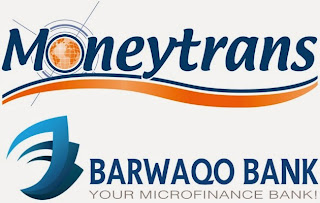 Barwaqo Bank has been functioning effectively for the past calendar year. Barwaqo Bank offers a range of financial services that target low-income individuals and small businesses that lack access to banking loans. Barwaqo Bank is one of the first microfinance providers to open in Somalia and by offering services such as microcredit, micro saving and insurance products, Barwaqo Bank aims to help fuel economic growth and job creation for the under privileged segments in society.
Barwaqo Bank also recently launched its money transfer operations globally, this in turn allows many Somalis to send money to Somalia via the most secure way possible as money transferred enters the customers Barwaqo Bank Account, this has allowed efficient inter banking between consumers.
With offices in Somalia and Europe, Barwaqo Bank is on course to benefit from recent changes in terms of regulation between money providers. The CEO of Barwaqo Bank Mr. Abdisalan Musa said "the issues we have had with Somali money transfer companies was according to regulators, the recipient was always unknown which made regulators wary of facilitating such funds in case these funds ended up in the wrong hands. However, in our case its clear who the recipient is because they have online current or savings accounts with us."
The drama between Somali money transfer companies and regulators has been a consistent issue for the past two years and as a result many Somali money transfer companies have had their accounts closed by regulators and major banks, both here in the UK and the US. Yet, at Barwaqo Bank, there has been a consistent focus on ensuring that such stringent standards are met. It is for this reason that MoneyTrans, one of the largest money transfer companies in the Western world has signed an agreement with Barwaqo Bank. This will enable Barwaqo Bank to truly reach its potential whilst at the same time providing many Somalis across Europe the opportunity to be able to remit money back home without facing any issues.


We also interviewed the CFO of Barwaqo Bank; Hassan M. Dudde who had this to say; "the average amount sent from abroad to Somalia is around $200 which barely covers a family’s basic day to day needs, as a result it is imperative that we ensure the money gets to those who need it the most. For this reason at Barwaqo Bank we insure that all transactions are recorded for both auditing and transparency purposes, in line with international regulatory frameworks".
Posted by IAMTN at 02:52:00 No comments:

In a move to make its contribution to the support of people effected by the severe earthquake in Nepal, the France-based international provider Tempo Money Transfer and its local partner Samsara Money Transfer have decided to introduce free inbound transfers to Nepal for up to 500 euros, as of the beginning of May.
Anyone who has loved ones or humanitarian reasons can visit one of over 70 TMT’s locations in France and Germany and send supporting funds to friends and family members, paying no fee. The cash can be picked up in over 1,800 agent locations using Samsara’s IT solution in Nepal.
“As a European company, we could not stay away. The shock of the experience this wonderful country has gone through echoes its pain in all of us. We are a socially responsible company and feel we should do what we can to help people cope with this terrible tragedy. We are very happy to act jointly with our colleagues in Samsara. I believe that the joint initiative will make us all stronger,” said the president for Tempo France, Mr. Jeffrey Phaneuf.


The director of marketing and business development for Samsara Money Transfer, Mr.SurajChhetri said that it is very important that at this moment, Nepal feels international support on all levels. “We are very happy that our European partners have shown such compassion, feeling exactly what we feel and are ready to help. We are in a socially responsible business playing a great humanitarian role and in this situation we realise it even more,” he said.
Posted by IAMTN at 11:54:00 No comments: